Before Cliff and I were even married, we knew that homeschooling was the right choice for our family for a variety of reasons. Fast forward 11-12 years and here we are.

Yesterday was the first day of school at 5 Solae Academy! 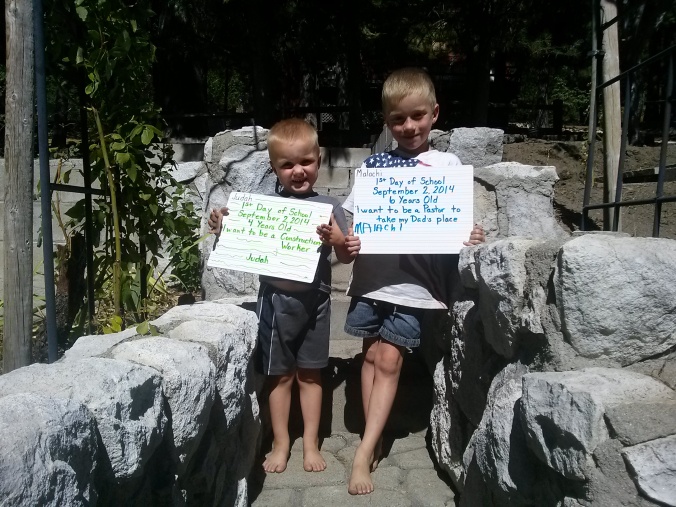 My plan was to have school during the Littles nap to prevent the chaos and destruction that comes with two year old twins, but the boys were so excited I decided to do part of my plan for the day in the morning. 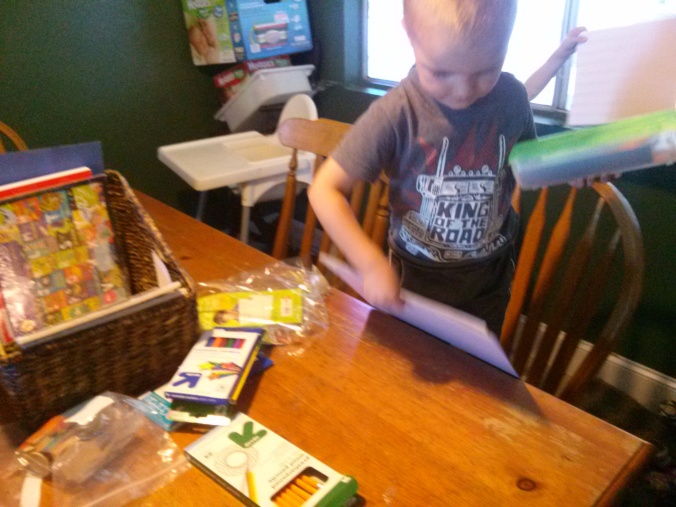 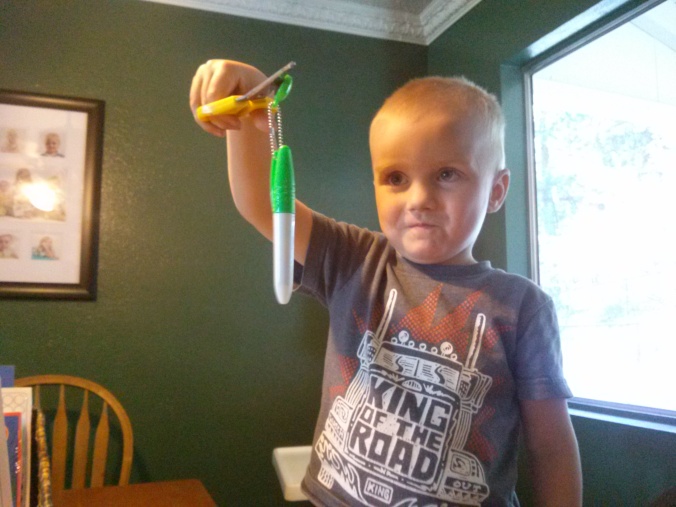 An unplanned lesson on magnets.

They each have their own pencil case with pencils, a white board marker, (both new), scissors (we already had),  a small pack of crayons and a short ruler (both free from the fire department at a recent community fair), a paper towel “eraser” for their whiteboards and a small letter line I made. 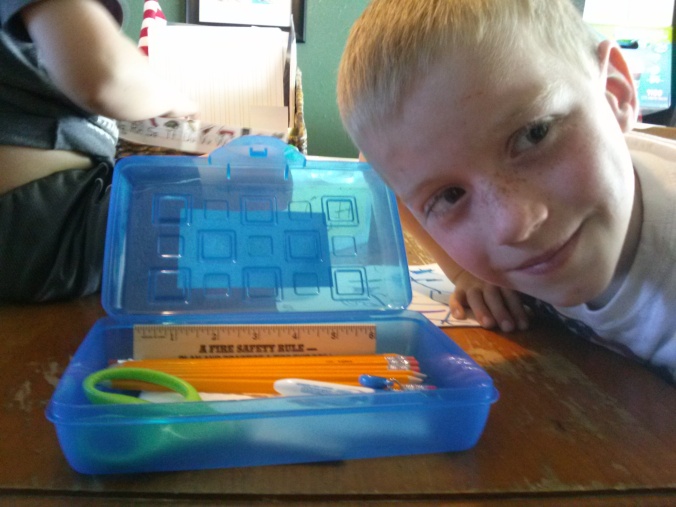 Malachi and his supplies 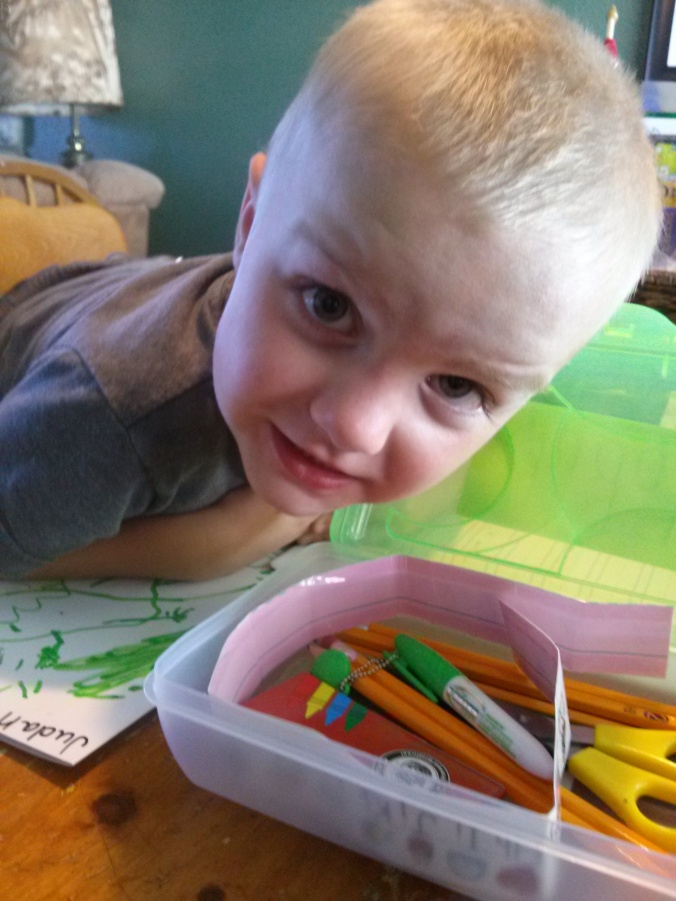 Judah and his supplies

They also got their own whiteboard and journal. The craft box (a wipe box) has new skinny markers, colored pencils, glue and a bigger box of crayons. 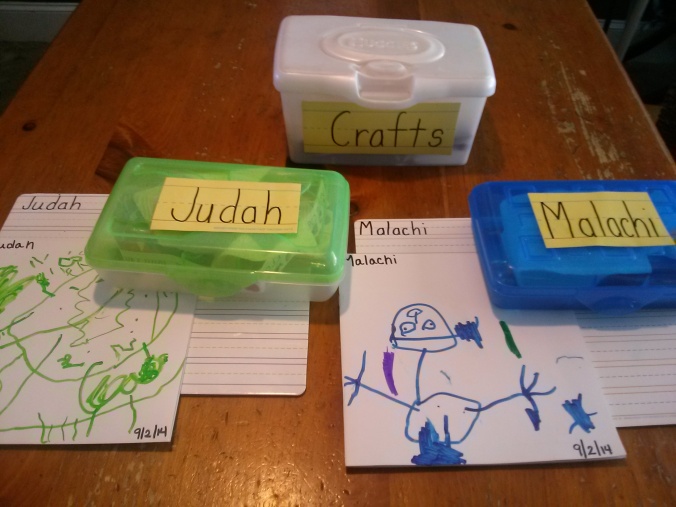 After we sorted our supplies, we prayed and recited the Pledge of Allegiance. Then we jumped into reading which Malachi is very excited about and ready for. I am using the book Teach Your Child to Read in 100 Easy Lessons  which is a phonics program. We learned the sounds “mmmmmm” and “ssssss.” Malachi said that  saying “mmmmmm” was making him  hungry so after the lesson we took a break for chips and salsa and my doctor’s appointment. While we were working on reading, the Littles were busy undoing all the work we had just finished despite Grandma’s best efforts to distract them.

After my doctor’s appointment, we did our first lesson on science. I am using Discovering God’s World (Abeka) for science. The first unit is “Discovering Myself” and we will be concentrating on the 5 senses. While I read the introduction of the unit, the boys colored pictures of themselves on the front covers of their journals, including brains and in Judah’s case other things 4 year old boys talk about (ahem). 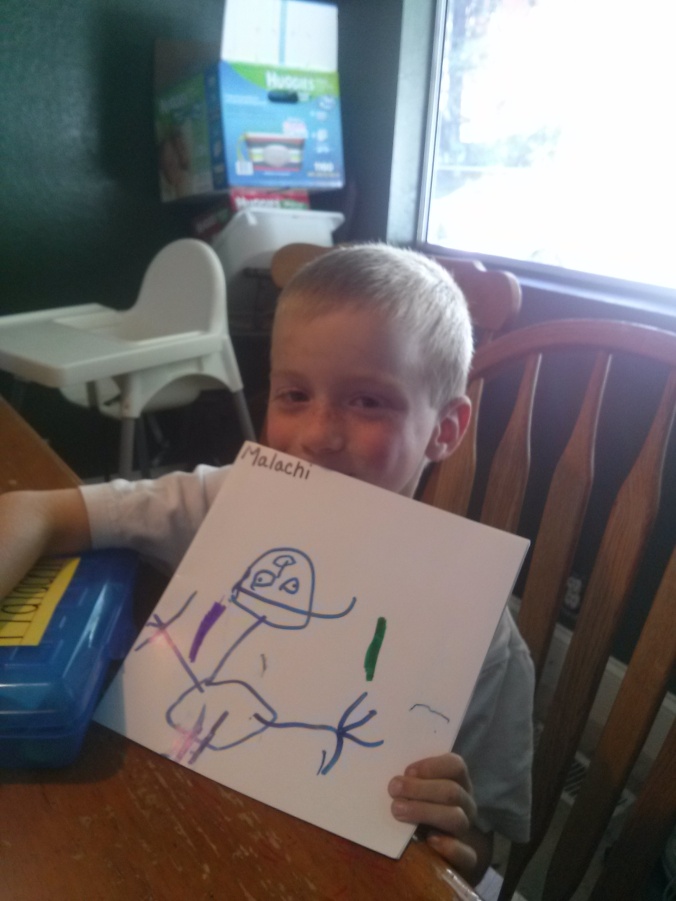 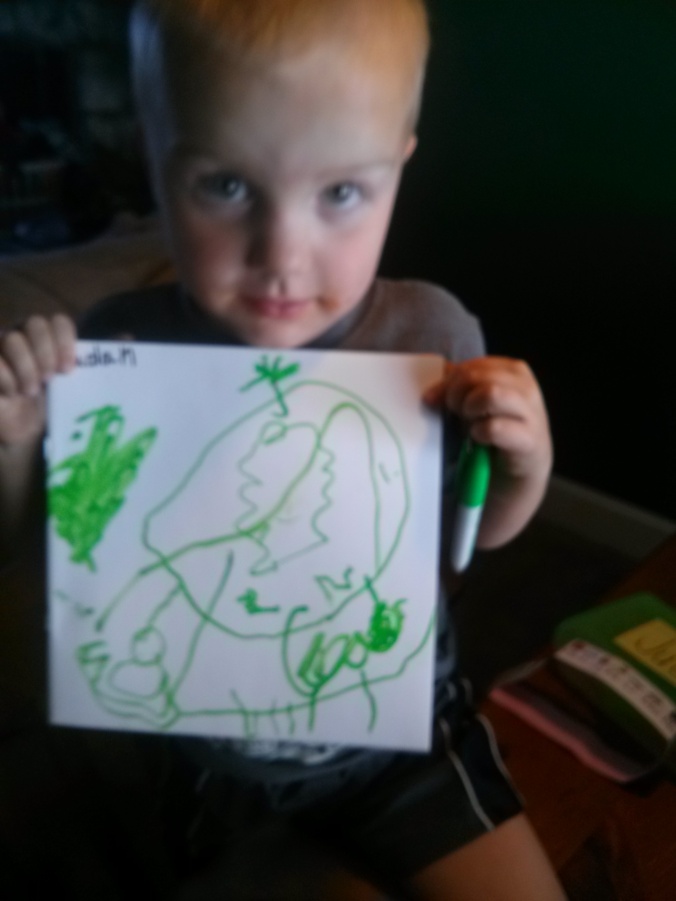 We ended the day making our 1st day of school signs. Judah wants to be a construction worker when he grows up and Malachi wants to be a pastor “to take my Dad’s place.”

We had a few hiccups along the way where Malachi got frustrated, but I found after a few sentences of encouragement, if I continued as planned he recovered and join us again. Shortly after we were finished, Malachi asked for more school work (yay!) so he practiced writing his name on his white board and did an alphabet puzzle with Grandpa. 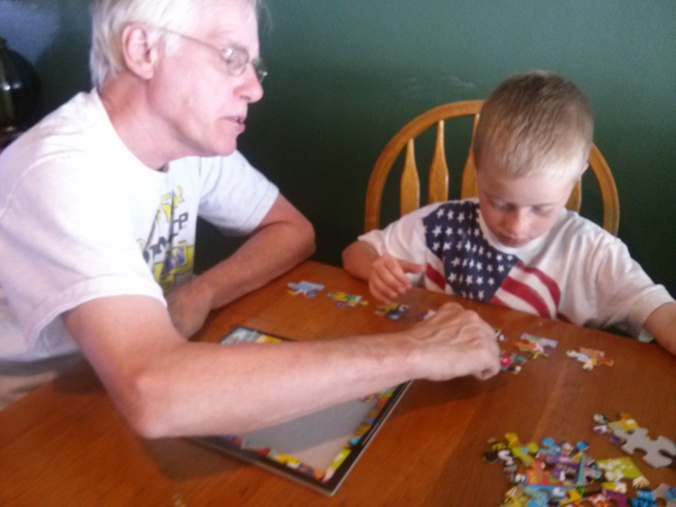 Working a puzzle with Grandpa

Overall, it was a great first day at 5 Solae Academy.  We are looking forward to 16 more years.

If you homeschool, how was your first day?

5 thoughts on “5 Solae Academy is Open: Our First Day”

Timeless Ideas for a Twaddle-Free Education™

fullmanger
Life As Mom Knows It
Life Is A Beautiful Mess

A glimpse into the mess of life and the beauty of grace.

musings about faith and family

raising the next generation of flawed humans

i have no greater joy

than to hear that my children are walking in the truth ~ 3 John 1:4

Research, Resources & Realistic Recommendations for Parents of Kids age 1 to 5